Thompson’s statement goes directly against the Constitutional right of citizens to not be forced to speak (testify) against themselves.

In The Constitution of United States of America – Amendment V

“No person shall be held to answer for a capital, or otherwise infamous crime, unless on a presentment or indictment of a Grand Jury, except in cases arising in the land or naval forces, or in the Militia, when in actual service in time of War or public danger; nor shall any person be subject for the same offence to be twice put in jeopardy of life or limb; nor shall be compelled in any criminal case to be a witness against himself, nor be deprived of life, liberty, or property, without due process of law; nor shall private property be taken for public use, without just compensation.”

In addition, in the Miranda rule, which the Supreme Court recognized as a constitutional right in its 1966 decision Miranda v. Arizona, suspects must be informed of their Fifth and Sixth Amendment rights “prior to interrogation”

Well, Thompson and the other Democratic fascists on the sham January 6th committee continue to add and have subpoenaed moreTrump associates in their “investigation”.

Some of those connected with former President Donald. J Trump, and/or involved at all with the lead up to and events that transpired on January 6th, 2021, include Roger Stone and Alex Jones. Both gentlemen say they will likely plead the Fifth in response to the subpoenas.

Earlier on Wednesday, the committee voted to hold former Trump DOJ official Jeffery Clark in contempt for defying a subpoena.

“The implications is we will give Mr. Clark his right to assert his Fifth Amendment before the committee if he chooses,” Thompson said. “We’re doing everything we can to show we’re not partisan.”

“But you know, if you say you haven’t done anything wrong but on the other hand you want to assert the Fifth Amendment in terms of self-prosecution, it says that you have something to hide. So we’re going to give him an opportunity to do it.”

“He can do it and it will be under oath and he is still subject to certain penalties should he decide to not tell us anything,” Thompson added.

“If he is saying, ‘I’ll come but I’ll plead the Fifth,’ in some instances that says you are part and parcel guilty to what occurred,” he said.

The King of the January 6 Clown Committee, @BennieGThompson, said that if you choose to plead the 5th, you’re guilty.

That’s not what the law says, Bennie.

He needs to read the constitution. 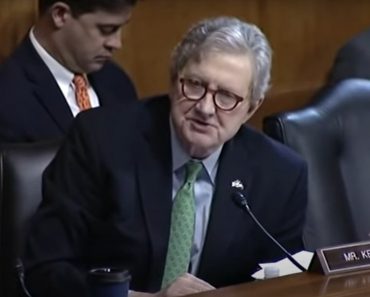