Home
News
WATCH: Pelosi Has Meltdown, Walks Away From Podium, Then Comes Back For Another Meltdown
Prev Article Next Article
Share the Story : 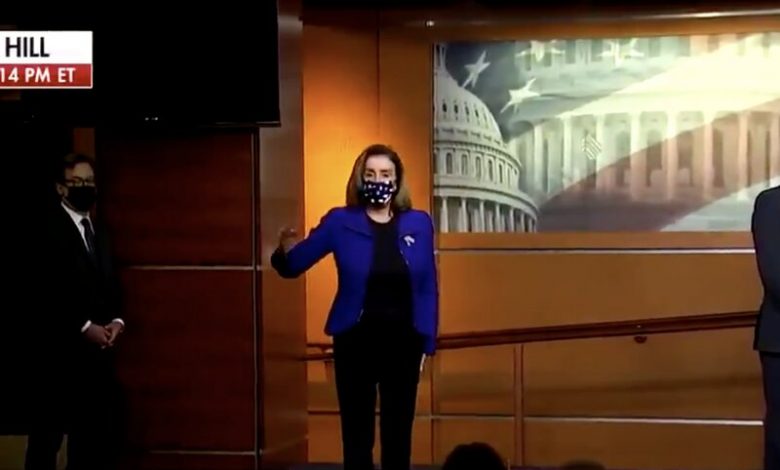 The Democrat cannot accept the fact that former President Donald Trump had nothing to do with the riots in the Capitol. Pelosi and her Democrat friends tried really hard to hurt his reputation. It did not work.

The former president was acquitted by a vote of 57-43 on Saturday. It was a big blow for Pelosi and she could not even control herself during her press briefing. She is “finished.” And just when you thought that she would just stop talking and go home, Pelosi came back and started screaming again.

“What we saw in that Senate today was a cowardly group of Republicans who apparently have no options because they were afraid to defend their job, respect the institution in which they serve. ‘Hang Mike Pence’, was the chant, and they just dismissed that. Why? Maybe because they can’t get another job,” she said hysterically.

Pelosi even had the courage to mention the US Constitution.

“What we saw today was a cowardly group of Republicans,” Speaker Pelosi said of the final vote to acquit former President Trump pic.twitter.com/OkQQMB7Vxe

After her initial meltdown, Pelosi made her way to the exit, but one reporter talked about censuring Trump in the Senate. She lost it. yes, She had to return.

“Censure is a slap in the face of the constitution! That lets everybody off the hook. All these cowardly Senators who couldn’t face up to what the President did, and what was at stake for our country. And now they’re going to have a chance to get a slap on the wrist?“, Pelosi exclaimed.

PELOSI: Censure is a slap in the face of the Constitution that lets everybody off the hook…We censure people for using stationery for the wrong purpose. We don’t censure people for inciting insurrection that kills people in the Capitol. pic.twitter.com/VvhR4yvBeC