CNN has turned on Joe Biden. The pro-Democrat news network has lurched into negative coverage of the Biden administration in a manner not seen since the Trump presidency in the 2020 election aftermath.

On Monday, the news network dissected every broken promise on Afghanistan made by Biden on the campaign trail and during his presidency.

“The rapid fall of Afghanistan stunning the Biden administration and this nation, quite frankly,” Brianna Keilar opened the segment.

“Many of the promises and the predictions and the words of the president and his White House are coming back to haunt them.”

The first clip was Joe Biden on July 8th asking a question on Afghanistan.

REPORTER: “Is a Taliban takeover of Afghanistan now inevitable?”

Biden: “Because you have the Afghan troops at 300,000 well-equipped, as well equipped as any army in the world, and an air force against something like 75,000 Taliban. It is not inevitable. So the question now is, where do they go from here? That, the jury is still out, but the likelihood there’s going to be the Taliban overrunning everything and owning the whole country is highly unlikely.”

“Well, they own the whole country now, the Taliban does,” Keilar remarked. “When Biden made those comments on July 8, just about a month ago, the Taliban had already started gaining ground in the country. Biden said for months that it was going to be up to Afghan leaders and security forces to maintain power.”

Then the next clip rolled, showing Biden discussing the situation in Afghanistan on July 2.

Biden: “I think they have the capacity to be able to sustain the government. We can be value-added. But the Afghans are going to have to be able to do it themselves with the air force they have and which we’re helping them maintain.”

“They absolutely were not, the Afghan security forces able to sustain that. Afghanistan fell within days,” Keilar said. “And in Kabul, the Taliban met little resistance. President Ashraf Ghani had already fled the country by the time the Taliban marched into the streets of Kabul. Secretary of State Antony Blinken conceding the administration was unprepared.”

In the following clip, Secretary of State Tony Blinken discusses the ascending power of the Taliban.

BLINKEN: “That the Taliban was at its greatest position of strength at any time since 2001, when it was last in charge of the country. That is the Taliban that we inherited. And so we saw that they were very much capable of going on the offensive and beginning to take back the country. And the fact of the matter is, we’ve seen that that force has been unable to defend the country. And that has happened more quickly than we anticipated.”

“The Biden administration is now unable to articulate why the evacuation of its personnel and Afghan allies was botched so badly after Biden himself had vowed a competent withdrawal,” Keilar added.

CNN then turned back to Biden in a particularly damning remark on the Afghan evacuation he made on April 14.

Biden: “We’ll not conduct a hasty rush to the exit. We’ll do it — we’ll do it responsibly, deliberately and safely. And we will do it in full coordination with our allies and partners, who now have more forces in Afghanistan than we do.”

“Biden has mobilized additional U.S. troops to join the few thousand that are still in Afghanistan as the U.S. attempts hasty evacuations from Kabul’s airport, even as the Taliban controls neighboring areas,” Keilar said. “And one more recent promise that has been broken. That is the promise that this would not be similar to the fall of Saigon in 1975.”

CNN then showed Biden refuting that the Afghanistan exist would look anything like the Fall of Saigon. Of course, the prediction would utterly fail to materialize.

Biden: “The Taliban is not the South — the North Vietnamese Army. They’re not — they’re not remotely comparable in terms of capability. There’s going to be no circumstance where you’re going to see people being lifted off the roof of an embassy of the United States from Afghanistan.”

This is some of the strongest criticism that CNN has ever shown towards a Democratic president. It would be a step forward for the network if it would be as critical towards Biden on every policy as it is towards the disastrous Afghanistan pullout.

Even CNN’s homepage has taken a strong position towards President Biden and his speech. The rapid shift in tone may signal an imminent end to another presidency — this time, an American one. 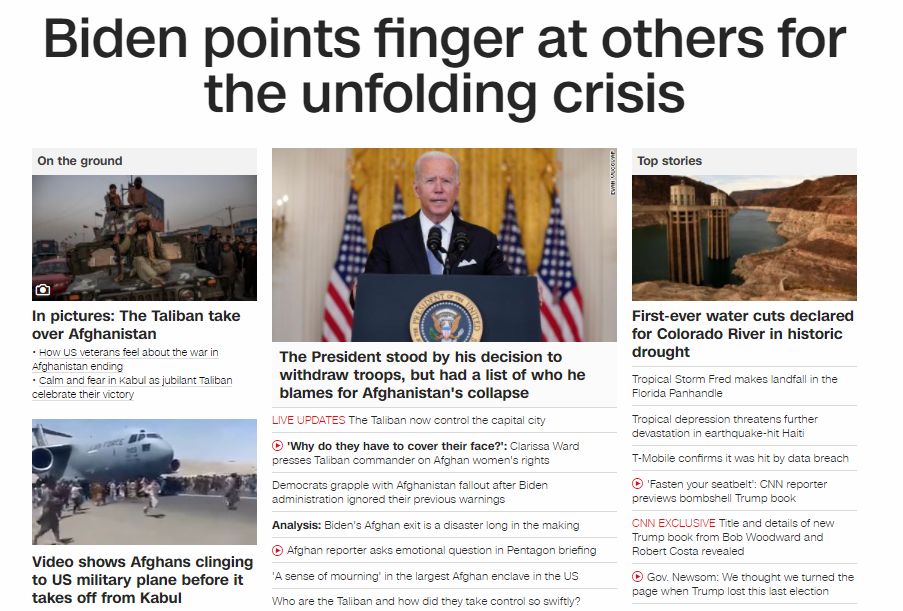 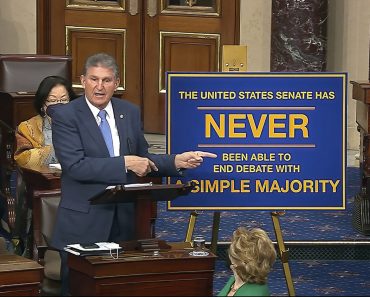