America has known that it was coming for a long time. Democrats have to be scared out of their minds. Facebook and Twitter and probably a little worried, too.

Here’s the scoop, from Yahoo News via Reuters:

Similar to Twitter, the app offers features to follow other people and trending topics, according to demo photos. Its message equivalent of a tweet will be dubbed “truth”.

The app’s launch would come 13 months after Meta Platforms Inc’s Facebook and Twitter banned Trump for encouraging his supporters to participate in the Jan. 6 attack on the U.S. Capitol based on unsubstantiated claims of widespread fraud in the 2020 presidential election.

Toward the end of the Trump presidency, a number of social media networks began exploring ways to lessen the Commander in Chief’s ability to communicate with the nation, including some outright account bans on platforms such as Facebook and Twitter.

Twitter has since reiterated that their banning of Donald Trump is a permanent situation, while Facebook was said that there is a perpetual review on his status.

Not long after, however, Facebook took another step toward canceling Trump altogether, banning anything considered to be “in the voice of Donald Trump.”

Facebook removed a video of an interview with former President Trump conducted by his daughter-in-law Lara Trump, saying any content “in the voice of Donald Trump” would be scrubbed from the social media platform.

Facebook permanently banned the former president from their platform in January after the Capitol riot.

On Tuesday, Lara Trump, a Fox News contributor, posted an image on Instagram of her sitting across from her father-in-law, urging followers to “Join us tonight!”

What’s a billion dollars to a multi-billionaire? Probably nothing.

But what’s a billion dollars to a man with an ego the size of Trump’s? Probably a lot.

That being said, the duly-elected POTUS didn’t care about losing money. He’s not dumb.

He knew what he was getting in to when he ran declared his candidacy back in 2015.

But losing a billion dollars is what can happen when you don’t take a salary or make any business deals for four solid years.

WASHINGTON – The presidency appears to have cost Donald Trump more than $1 billion in wealth.

Trump tumbled nearly 300 spots on Forbes’ billionaire rankings during his presidency, the magazine reported this week, with his estimated wealth falling from $3.5 billion to $2.4 billion during his four-year term.

The list is topped by a frequent political target of Trump: Amazon and Washington Post owner Jeff Bezos, whose wealth is tagged at $177 billion.

ABC’s Martha Raddatz to illegal alien who crossed the border: “Would you have tried to do this when Donald Trump was president?”

Raddatz: “Did you come here because Joe Biden was elected president?” 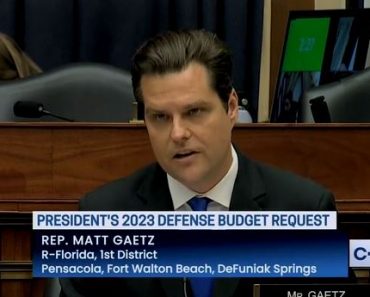