Former President Donald Trump told an energized rally crowd in Texas Saturday night that his “MAGA” movement the “greatest” in the history of the country as he pledged that the Lone Star State would never “turn blue.”

“Our country is angry and our country wants to be respected again,” Trump said during his latest “Save America” rally in Conroe, Texas. “Hello, Texas, it’s great to be back in this great, wonderful beautiful state with thousands of proud American patriots who believe in family and freedom, God and country.

“And by the way, oil and guns – unlike the Democrats,” he said to what reports called the largest political rally crowd in the state’s history.

At the Trump rally in Conroe, Texas.

I’ve never seen a crowd this big before. pic.twitter.com/I9ZPm01X5Z

During the event, Trump tossed out red hats that said “Make America Great Again,” his 2016 campaign slogan, and “Save America.”

“Our MAGA movement is by far the greatest political movement in the history of our country, and I say it all the time, and they never even – the fake news – they never even questioned it because it there’s never been anything like it,” Trump said.

“And you know what it really stands for? Loving our country, that’s all it is,” he added.

“Together we are standing up against some of the most sinister forces, entrenched interests, and vicious opponents our people have ever seen – could say our country has never seen anything like it.

“But no matter how big or powerful these corrupt radicals may be, you must never forget our nation does not belong to them. Our nation belongs to you. This is your home. This is your heritage. And our American liberty is your God-given right,” he continued.

“Where you would rather be on a Saturday night than a Trump rally in the state of Texas?” Trump asked a crowd, which he called the “biggest ever of its kind” in the state.

The former president has yet to formally announce whether he will run again for the White House in 2024 but he has dropped plenty of hints and he continues to hold political rallies as a candidate would.

“Everyone in Washington is obsessing over how to protect Ukraine’s border, but the most important border in the world right now for us is not Ukraine’s border; it’s America’s border,” Trump said. “And we do nothing about it, but let people come in, and we have no idea who they are.

“The first duty of the American president is to defend the American border. Before our leaders talk about invasions of other countries, they need to stop the invasion of this country,” he implored.

The former president also vowed there would be a GOP revival beginning later this year in the midterm elections.

“In 2022, we are going to start by ending Nancy Pelosi’s political career once and for all, and then we’re going to kick the Biden crime family out of the White House in 2024,” he said.

“Biden has the real scandals,” he continued, “and rest assured when Republicans retake Congress the Biden corruption will be investigated and exposed by Congress.

“But we no longer have a free and fair press. If we did, all of this would end; it wouldn’t be there.”

He also implored Republicans to turn out in November.

“We’re just nine months away from what could be the most important midterm victory in all of American history,” Trump said. “Great people, including the people that we just mentioned. Our country is at stake, and we need a landslide so enormous that the radical Democrats cannot steal it, no matter what they do.

“That’s what we need. If we make it big enough, it gets very, very hard.” 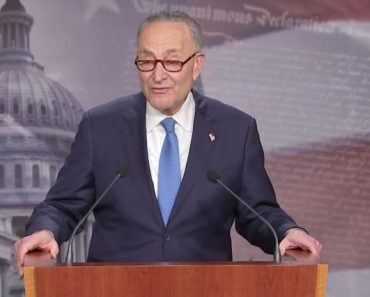