Home
Latest News
Trump Abruptly Ends Interview — When You See the Video, You Might Hardly Blame Him
Prev Article Next Article
Share the Story :

“Let me read you some short quotes,” NPR’s Steve Inskeep asked. “The first is by one of the judges, one of the 10 judges you appointed, who ruled on this. And there were many judges, but 10 who you appointed. Brett Ludwig, U.S. District Court in Wisconsin, who was nominated by you in 2020. He’s on the bench, and he says, quote, ‘This court allowed the plaintiff the chance to make his case, and he has lost on the merits’.”

“Another quote, Kory Langhofer, your own campaign attorney in Arizona, Nov. 12, 2020, quote, ‘We are not alleging fraud in this lawsuit. We are not alleging anyone stealing the election’. And also Rudy Giuliani, your lawyer, Nov. 18, 2020, in Pennsylvania, quote, ‘This is not a fraud case.’ Your own lawyers had no evidence of fraud, they said in court they had no evidence of fraud, and the judges ruled against you every time on the merits.”

“It was too early to ask for fraud and to talk about fraud,” Donald Trump replied. “Rudy said that, because of the fact it was very early with the — because that was obviously at a very, very — that was a long time ago. The things that have found out have more than bore out what people thought and what people felt and what people found.”

“When you look at Langhofer, I disagree with him as an attorney,” Trump continued. “I did not think he was a good attorney to hire. I don’t know what his game is, but I will just say this: You look at the findings. You look at the number of votes. Go into Detroit and just ask yourself, is it true that there are more votes than there are voters? Look at Pennsylvania. Look at Philadelphia. Is it true that there were far more votes than there were voters?”

“It is not true that there were far more votes than voters,” Inskeep said. “There was an early count. I’ve noticed you’ve talked about this in rallies and you’ve said, reportedly, this is true. I think even you know that that was an early report that was corrected later.”

The interview gets increasingly combative at this point.

“Why is it that you think that the vast majority of your allies in the United States Senate are not standing behind you?” Inskeep asked. “We did have that statement by Mike Rounds.”

“Now, we had a lot of cases where the judges wouldn’t hear him,” Trump added. “We had a case in Nevada that was so good. You read the papers. It’s impossible. The judge refused to even listen to it. We had many cases. In fact, they say, and I can’t testify because it’s been through a lot of systems, a lot of different systems. But they say, and they say very strongly, the judges just — nobody’s really gotten a chance to look. Look at the United States Supreme Court. They refused to hear the case. And you had, I guess, 19 states suing –”

“They said, there was no standing to give the case,” Inskeep said. “That’s correct. Can I just ask –”

There was more debate on this topic before the abrupt end to the interview.

“If you’ll forgive me, maybe because the election was about you,” he added. “If I can just move on to ask, are you telling Republicans in 2022 that they must press your case on the past election in order to get your endorsement? Is that an absolute?”

“I want to…” Inskeep tried to interrupt.

“And the only way it’s not going to happen again is you have to solve the problem of the presidential rigged election of 2020,” Trump continued.

“So Steve, thank you very much. I appreciate it,” Trump added and then left the interview.

Donald Trump walked out, but one gets the sense that the interview had gone everywhere it needed to go. The journalist stated his points, Trump stated his points, and the former president felt like he had better things to do with his time.

Now, it would be refreshing if journalists would turn their attention to politicians who are actually and power and the pressing issues facing the country. Because most of them seem to be completely unconcerned by the demonstrable fraud that the Democratic Party is foisting on the American people on a daily basis. 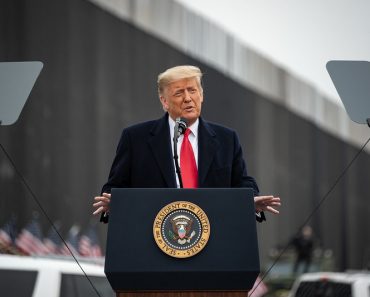