San Francisco school board member Alison Collins has taken a lot of heat for an explosive claim that “white supremacist thinking” abounds in the Asian American community.

“Board Vice President Alison Collins, elected in 2018, said in a thread of tweets on Dec. 4, 2016, that Asian Americans had used ‘white supremacist thinking to assimilate and ‘get ahead,’” the San Francisco Chronicle reported. “Collins explained in the thread that she was seeking to ‘combat anti-black racism in the Asian community’ and ‘at my daughters’ mostly Asian Am school.’”

Collins also said her “best from school says she feels alone in the Chinese community,” adding, “she feels ostracized when she speaks up against anti-black hate.”

“San Francisco’s top elected officials, including the mayor, state legislators and nearly all supervisors, called Saturday for a school board member to resign over racist tweets she posted in 2016 directed at Asian Americans,” the Chronicle also reported.

“We are outraged and sickened by the racist, anti-Asian statements tweeted by school board Vice President Alison Collins that recently came to light,” 22 current and former elected officials said in a statement Saturday. “No matter the time, no matter the place, and no matter how long ago the tweets were written, there is no place for an elected leader in San Francisco who is creating and or/created hate statements and speeches.”

Allison Collins objected to beign called out for her ethnically charged rhetoric, claiming her remarks were taken out of context.

At a post on Medium, Collins also argued that:

A number of tweets and social media posts I made in 2016 have recently been highlighted. They have been taken out of context, both of that specific moment and the nuance of the conversation that took place. President Donald Trump had just won an election fueled by division, racism and an anti-immigration agenda. Meanwhile one of my daughters had recently experienced an incident in her school in which her Asian American peers were taunting her Latinx classmate about “sending kids back to Mexico” and the KKK. It was a time of processing, of fear among many communities with the unknown of how the next four years would unfold.

And here we are today. Anti-Asian racism is not new, but the recent uptick in violence and bigotry against Asian-Americans is clearly connected to Trump and his racist tropes.

In addition to her claims about anti-black hatred in the Chinese community, she alleged that she heard boys teasing a Latino about “Trump, Mexicans, and the KKK.” She also demanded, “Where are the vocal Asians speaking up against Trump? Don’t Asian Americans know they are on his list as well?” 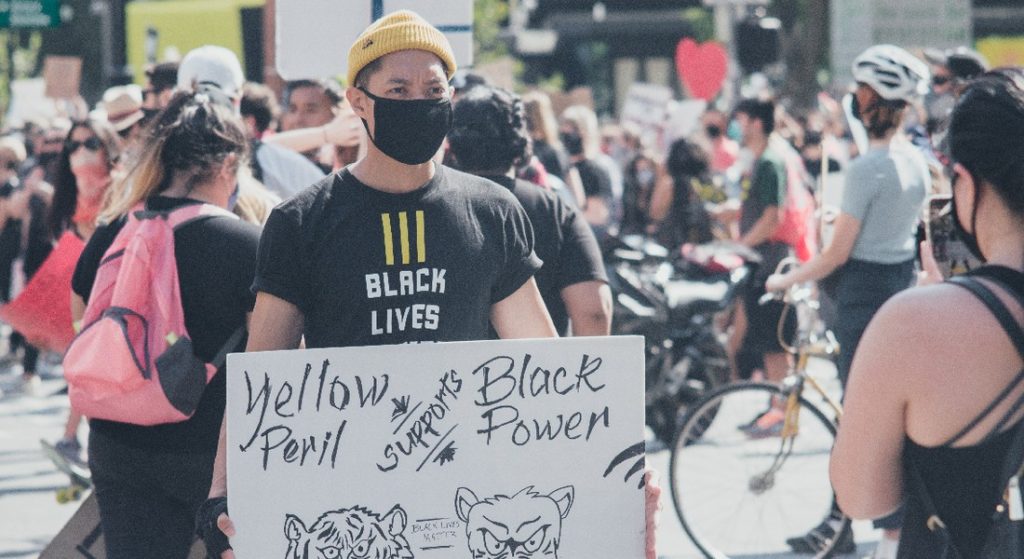 Collins’ thread exposes a number of imperatives for the radical left: Bringing Asian Americans into the left’s clientele of victim groups, even though Asian Americans make more money per capita than white Americans.

It is difficult to argue structural racism exists against Asian Americans, when their hard work and communal values make them more successful than the white Americans who are allegedly oppressing everyone.

As pointed out earlier here, the media’s new obsession with “hate crimes” against Asian Americans is eliding that the majority of the high profile crimes are being committed by Black Americans, the data on “hate incidents” is mostly self-reported and shoddy, and that the biggest case, the Atlanta shooting, shows no evidence of having to do with race. Two of the victims happened to be white, and the suspected shooter, Robert Aaron Long, targeted massage parlor workers because of his struggle with sex addiction.

None of this fits into the left’s narrative that America is structurally racist, and so we are seeing a drive to blame Trump supporters for “hate crimes” they are not committing.

While Alison Collins struck a nerve by accusing some in the Asian American community of displaying “white supremacist thinking,” the real offense is that this is a fallacious argument being wielded against tens of millions of Americans who do not believe that whites are superior to blacks, Asians, or any other race or ethnicity.