The Border Patrol chief forced out by Joe Biden is sounding the alarm that the real national security crisis is the record number of known and suspected terrorists flooding into America through the U.S.-Mexico border.

Ex-Border Patrol Chief Rodney Scott is warning that there are more “known or suspected terrorists than recorded in previous years” who have crossed the southern border since Biden took office.

“Over and over again, I see other people talk about our mission, your mission, and the context of it being immigration or the current crisis today being an immigration crisis. I firmly believe that it is a national security crisis,” Scott said.

“Immigration is just a subcomponent of it. And right now it’s just a cover for massive amounts of smuggling going across the southwest border — to include TSDBs at a level we have never seen before. That’s a real threat,” he added.

“These include the apprehensions of 61,779 family unit aliens, 15,267 unaccompanied alien children, and 68,666 single adult aliens. While Texas is host to five of the nine southwest border sectors, the apprehension of migrants in these sectors accounts for 73 percent of the total apprehensions along the U.S.-Mexico border. The July apprehensions also show an increase from one month earlier of 16 percent,” the report added.

Check out a graphic below on the border crisis:

Migrant apprehensions at the U.S.-Mexico border are getting worse by the day and even worse month over month.v

U.S. Border Patrol agents have reported that agents apprehended nearly 210,000 migrants who illegally crossed the border from Mexico in July.

This represents an increase of 420 percent compared to July 2020.

“Despite the ‘necessary measures,’ the apprehension of migrants illegally crossing the border from Mexico has drastically increased every month since President Joe Biden took office in January and reversed the highly successful programs put in place during the Trump administration. In February, President Biden’s first full month in office, apprehensions jumped to 97,642. Since the end of January, apprehensions jumped from 75,142 to 199,777 — an increase of 142 percent in six months, according to the CBP’s July Southwest Land Border Encounters report,” Breitbart reported.

Check out the image below:

“CBP has also adapted to changing dynamics between ports of entry along the Southwest Border, continuing to take steps to mitigate the spread of COVID-19 by expelling roughly half of those encountered under CDC’s Title 42 public health authority,” Commissioner Miller concluded in his remarks.

In July, Border Patrol revealed they apprehended 210,000, which broke the previous record the month before.

The total for the fiscal year, which ends Sept. 30, has reached 1.3 million.

The last time border apprehension numbers reached 1 million was in 2006. 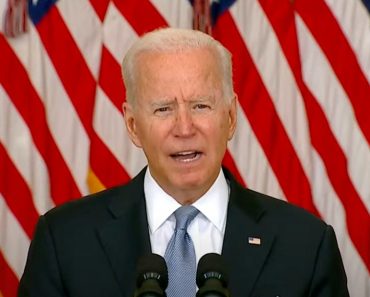