Home
Latest News
Missouri Couple That Defended Their Property from BLM Activists with Guns are Pardoned by the Governor
Prev Article Next Article
Share the Story :

The Missouri couple that drew headlines by defending their property from Black Lives Matter protesters in June 2020 have just received a pardon from Missouri’s governor.

Missouri Gov. Mike Parson pardoned Mark and Patricia McCloskey, as was declared in a release on Tuesday. Their names were included in a list of 12 that received pardons.

Mark McCloskey had brandished an AR-15, while his wife Patricia held a handgun in a video of a confrontation with Black Lives Matter protesters that were threatening to burn their residence down and kill them.

A couple has come out of their house and is pointing guns at protesters in their neighborhood #StLouis #lydakrewson pic.twitter.com/ZJ8a553PAU

The couple would describe the harrowing incident on an episode of “Hannity” on Fox News in early July.

St. Louis Circuit Attorney Kim Gardner filed charges against the St. Louis couple in July. They were charged with unlawful use of a weapon/flourishing. Although the charge was a felony that could carry a sentence up to four years in prison, they pleaded guilty to a misdemeanor and were fined.

“The legal process was not without controversy, as Democratic Circuit Attorney Kim Gardner, who charged the couple, was removed from her prosecutorial role after a judge ruled she would initiate the prosecution ‘for political purposes’,” the report added. 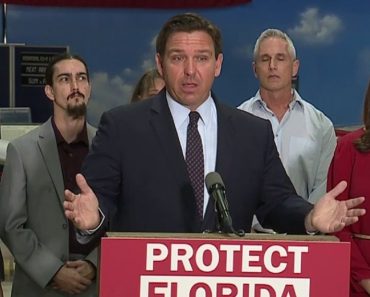