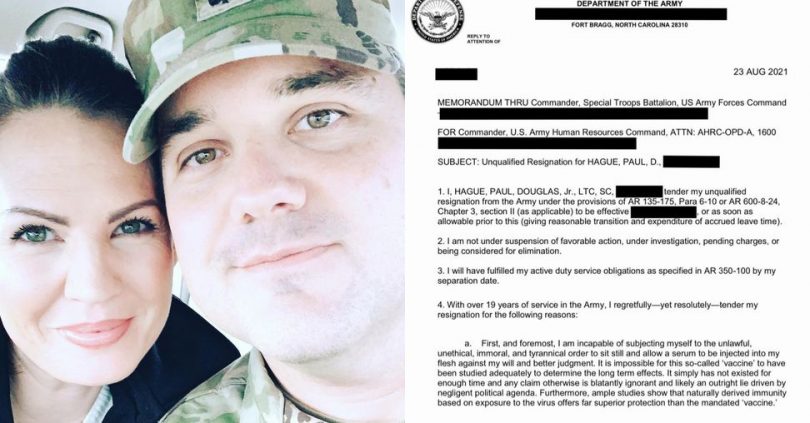 An 18-year military officer just short of full retirement has resigned from the U.S. Army over what he describes is a “Marxist takeover” of the military service. Lt. Col. Paul Douglas Hague’s resignation, passed on by his wife, merits being read in full. It takes the Biden administration and its political generals to task for betraying the nation.

“First, and foremost, I am incapable of subjecting myself to the unlawful, unethical, immoral and tyrannical order to sit still and allow a serum to be injected into my flesh against my will and better judgment,” Lt. Col. Hague wrote. “It is impossible for this so-called ‘vaccine’ to have been studied adequately to determine the long-term effects. It simply has not existed for enough time and any claim otherwise is blatantly ignorant and likely an outright lie driven by negligent political agenda. Furthermore, ample studies show that naturally derived immunity based on exposure to the virus offers far superior protection than the mandated ‘“vaccine’.”

“I cannot and will not contribute to the fall of this great nation and its people — those very Americans whom I swore to protect the liberty of at all costs,” he continued. “The values that our nation was founded on, has lived by and thrived under, have been utterly decimated by the current presidential administration and the leadership of the military; to include the Army. We are watching the fall of liberty at this moment. Governors and mayors forcibly locking down millions of Americans, restricting them from their unalienable right to pursue happiness, forcing them out of their jobs and their ability to participate in the most basic and fundamental rights life offers because of their personal beliefs and values.”

“These are the same values that we service members offer our very lives to protect and now we are being used as tools to boost the numbers of vaccinated people in order to further distance and alienate those who, knowing the personal risk of the disease, have freely decided to remain unvaccinated,” he continued. “I cannot be used as a tool against them, as they are my daughters, my son, my siblings, and my friends. They are the Americans that deserve my support and love.”

“A complete lack of confidence in the presidential administration and secretaries directing the military — as demonstrated by the sudden and rash, at best, but pushing traitorous withdrawal from Afghanistan,” he said. “The strategic decisions with regard to Afghanistan made by these people have not only unnecessarily cost the lives of 13 service members and many Afghanis, but have undoubtedly set our nation up for many more attacks both in Afghanistan and within our own borders.”

“While the need to respond quickly to move friendly personnel out of harm’s way may have been necessary, I have concerns that appropriate screening of personnel could not have taken place with the chaos and haste of the operations — potentially leading to transporting threatening terrorists to friendly nations, including the United States,” he added. “This entire situation was completely preventable by following the most basic tactics taught in all military schools to every Soldier in the Army. Establish security first and remove security last.”

“For our military leaders to overlook this at the level they operate gives reason for total lack of confidence, and even cause for concern that the best interest of the United States, Her people, and Her allies is not what is motivating those in positions of authority,” he went on. “What I view as an ideologically Marxist takeover of the military and United States government at their upper echelons.”

Lt Col. Hague’s wife had tweeted out her husband’s resignation letter. “After eighteen years of active duty service in the US Army, my lieutenant colonel husband has resigned. He’s walking away from all he’s worked for and believed in since he was an ROTC kid at UGA He’s walking away from his retirement,” she wrote.

After eighteen years of active duty service in the US Army, my lieutenant colonel husband has resigned

He’s walking away from his retirement

The resignation follows upon reports of allegedly ‘treasonous’ behavior committed by Chairman of the Joint Chiefs of Staff Mark Milley. In combination with the disastrous Afghan withdrawal, which stranded Americans in harm’s way, and a military vaccine mandate for young troops who are not statistically at risk, at least one officer has decided he cannot continue to serve a military that does not serve America’s best interests.