During the past 8 months of occupying the Oval Office, Joe Biden has had a rough go of it. It’s been bad. In fact, many would say “awful”.

Inflation is soaring, the economy is built on a house of cards, Americans are dying in Afghanistan, Covid is still spreading, and Biden is unable to get through a teleprompter speech without turning into a bumbling mess.

As a result, poll numbers for the former Vice President are taking a nosedive, and apparently Jen Psaki is incredibly sensitive about it.

As she was finishing up her Monday press briefing, a reporter tried to ask a question about his disastrous numbers. In response, Psaki snapped.

“The President’s polling continues to collapse….”, the reporter began.

Psaki, visually perturbed, snaps back, saying: “How about we don’t shout at the end? Next time let’s do it DURING the briefing, thanks everyone!”.

Watch below to see her cowardly scurry away from the podium:

WOW. Psaki just absolutely SNAPPED at a reporter and walked away after being asked about Biden’s plummeting poll numbers

Biden is crumbling, and Psaki knows it.

What is your reaction to Psaki’s latest dodged question? Comment below… 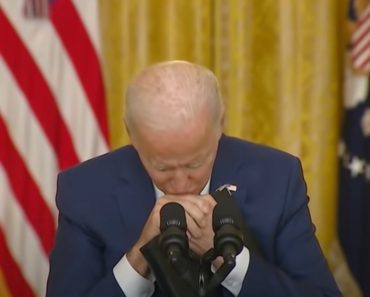