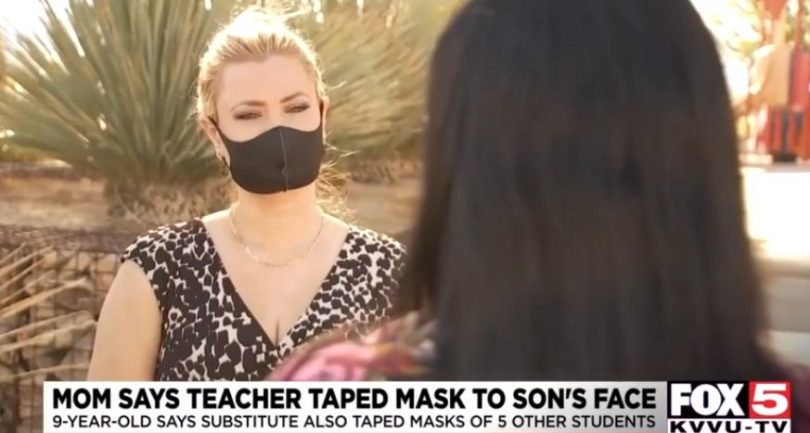 The school mask mandates are putting teachers, students and parents on edge. The face coverings, whose efficacy for a population that is not significantly at-risk is extremely dubious, to say the least, has become the subject of ongoing social conflict in schools across the United States.

One of the latest examples is a Las Vegas mother who is furious with a substitute teacher for taping her boy’s face mask to his face. KVVU reported on the incident:

“The mom of a local nine-year-old boy is demanding his substitute teacher be fired after she says that a teacher taped a face mask to her son’s face when he did not wear it properly in the classroom,” KVVU reported. “She spoke to us under the condition that we not use her name or show her face, worried her son could be further traumatized at school, but wanting other parents to know what is happening in one fourth grade classroom.”

“I was furious, furious,” the mother said. “I was scared for my son on what kind of like long-term effect it’s going to have on him socially. The fact that the entire class was laughing.”

“This mom of a fourth grade student at Reedum Elementary in Mountain’s Edge says his substitute teacher stepped way over the line when the nine-year-old failed to properly wear his mask in class,” the report said.

“He went to get a sip of water, forgot to put the mask on,” the mom said. “The teacher then did not tell him to put it back on or send him to the office. She instead pulled him up in the front of the classroom, in front of all of the students, and she then taped the mask across the top of his face.”

“The mom says the sub added a second layer of tape from his nose to his forehead, and with tape still on his face, he went to the office to pick up homework he’d forgotten at home and his dad dropped off,” the report added.

“When he went to the office to pick up that homework is when one of the administrators noticed the tape on his face,” the mother added.

“Alarmed, that administrator took the tape off of the child and alerted the principal, who went to the classroom to investigate, filling out this report,” the report continued.

“And she saw another student who she thought was my son with tape on their face, as well,” the mother said.

“This mom later asked her son and other students also had their masks taped to their face he said ‘yes, it’s been happening in his classroom since the beginning of the school year’,” the report went on.

“He says that he remembers up to five,” the mom added.

“This mom says it is not a political issue, she has no problem with the mask mandate,” the report said. “But says nine-year-olds like her son are often forgetful and should never be punished purposefully embarrassed in this way.”

“He was very upset, he was crying, he was humiliated,” she continued.

“Fox 5 questioned the school district about this incident, they responded, quote, ‘the district is aware of the isolated incident and is dealing with the employee through the proper channels the principal proactively notified the family of the investigation’,” the report said.

“But that’s not good enough for this mom,” the report added.

“I don’t think this woman has any business teaching children, for one,” the mother said. “Number two I think parents need to know what’s going on in the classrooms. It’s crazy corporal punishment in school should not be happening.”

“And the mom also filed a police report about the teacher putting her hands on the student,” the report noted. “She’s also now looking at changing schools or possibly moving to a charter school.”

This wasn’t the only such recent incident where a teacher bullied a child over masking.

At Glenbard North High School in Illinois, teacher Scott Grigoletto shouted and insulted a student for wearing his face covering below the nose.

“So enjoy the BIA – that’s an in-school suspension where you have to sit in a room with the military guy all day! Because you’re a piece of shit!” the teacher shouted.

Masks are not about children’s health. They are not statistically ‘at-risk,’ they are not designed to protect the wearer from viruses, and they have a negligible impact slowing the spread of coronaviruses. Conversely, they are increasing childhood anxiety, depression, and suicide calls, making them harmful overall for children.

When you throw in the pretext for teachers to berate children for not complying with the unnecessary mask mandate, then you have a recipe for disaster. Masks aren’t about health, they are about control. It’s time to stop denying this obvious fact before more damage to children’s mental health is inflicted.