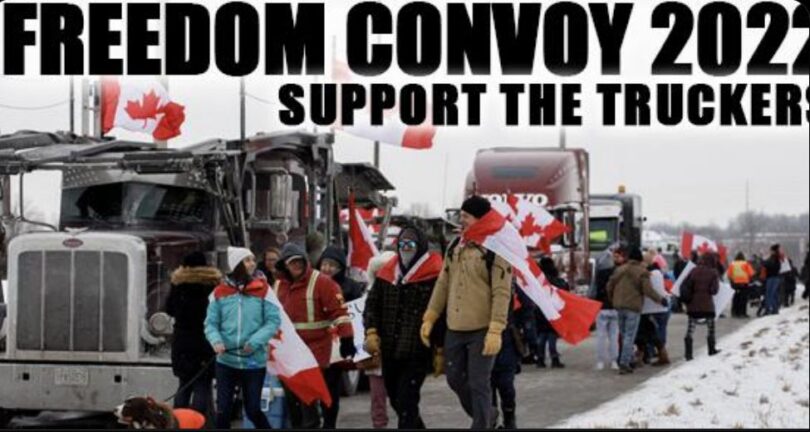 Freedom Convoy organizers have a message to their supporters: They are mobilizing legal action against GoFundMe.

“Hey, everybody,” BigRed19755 said on TikTok. “So, it’s Bridget and I. Hi, we’re in a room right now. It’s kind of cool. Just all the truckers out there. Okay. With this GoFundMe thing, please. Everybody be calm. We are fine.”

“This is probably going to work out even better than it did before, ’cause we’re gonna expose more liberal leftist pieces of, you know what,” he said.

“In this room right now we got Bridget, head lawyer, Keith, other lawyer, Ava, Andre, head lawyer, Tim, guys over here, banking accountant,” he went on.

According to True North, Freedom Convoy organizers are being represented by the Justice Centre for Constitutional Freedoms (JCCF) and “has a team of lawyers on the ground in Ottawa to provide legal assistance.”

“I don’t think they know who they’re f***ing with,” Big Red continued.

“Okay guys, we got this,” Bridget added.

“We got this, guys,” he continued. “We are going to wake up this world even more now… you want to see how biased this world gets when it comes to liberals?”

“It’s coming guys, we’re coming, everybody head for Ottawa this weekend,” he said. “We’re going to have a little bit of a shindig and everybody’s gonna get along and keep those hugs and smiles ’cause that’s exactly what we’re here for.”

“We want no mandates and we want unity,” he added. “And so far we’ve achieved the unity so much better, haven’t we?”

“We have freedom for everyone,” Bridget said.

“Guys, share this, get this out there,” he went on. “All those trucks in the yards need to hear this message. I will get out there and start talking to everybody as soon as I can.”

“We just got a few little hiccups with lawyers here to figure out right now,” he said. “You know, so much for a peaceful night. Have you had a peaceful night since we got here?”

“It’s always been peaceful though. Just busy,” he said.

“Busy, so busy,” Bridget added. “Thank you for all the emails.”

On Friday, Freedom Convoy attorney Keith Wilson had a “disturbing” message for Canadians and supporters of the truckers and farmers who have joined the movement.

“It’s Friday, February 4th,” Wilson said. “And I’m speaking to you from the hotel at the center of the truckers freedom convoy in downtown Ottawa.”

“This afternoon, the chief of the city police for Ottawa made announcements that are disturbing and should trouble Canadians and those around the world who support this trucker protest for freedom,” the lawyer added. “The police chief essentially announced an assault on the protestors. He announced that very specific measures that we normally only see instituted by oppressive regimes around the world would be initiated. He effectively announced that he is going to be taking away Canadian’s charter right of peaceful assembly and freedom of expression.”

“We are being censored,” he said. “Please get this out to the world.”
“There have been no riots, injuries or deaths,” Police Chief Peter Sloly testified Wednesday at the Municipal Police Services Board. “We are arresting, charging and investigating bad actors.” All charges against truckers to date involved routine traffic violations or breach of a local noise bylaw for horn honking.

The Freedom Convoy’s attorney, Keith Wilson, has confirmed that the new donation site is with the Christian crowdsourcing site GiveSendGo, which has pledged not to deplatform the Freedom Convoy organizers.

I confirm that this is the new official donation site for the Freedom Convoy 2022. Please help the truckers fighting for freedom. https://t.co/oHOldcL17y

GiveSendGo has been “all hands on deck” to upgrade its servers to handle the flood of those wanting to contribute. The platform has asked those trying to contribute to remain patient and try again if they had difficulty getting on the site earlier. As of the time of publication, the website was up and running. I can confirm personally it is possible to make a donation. So, stay patient.

There are a lot of reports about @GiveSendGo. The #FreedomConvoy2022 lawyers confirmed that this is the correct donation processer. I can confirm I was able to make a donation. Be patient. Here is the link if you want to contribute to the just cause! https://t.co/NwZaq29sWv