Private corporations now hold power over U.S. elections that is not accountable to the American voters. Secretive privately owned, profit-driven voting machine companies can withhold source codes, data, and security passwords from voters without recourse. They can veto any legal attempt at transparency and accountable, such as denying subpoenaes from elected officials.

A letter send from Dominion President & CEO John Poulos to lawyer Kory Langhofer demonstrates this disturbing reality: The American people no longer even control their own elections. This is the lesson of Dominion Voting Systems’ response to the Arizona Senate’s subpoena for election-related servers and passwords on Monday. 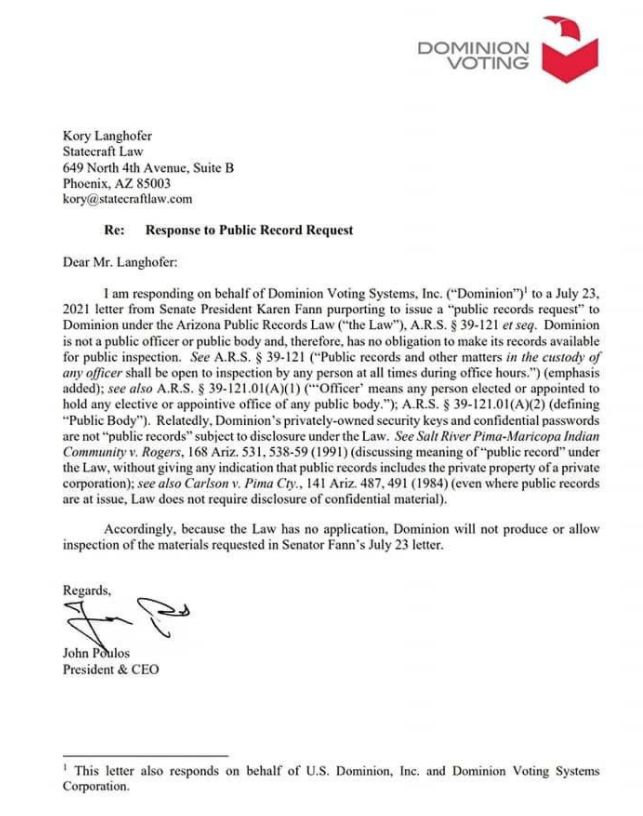 “I am responding on behalf of Dominion Voting Systems, Inc. (“Dominion”) to a July 23, 2021 letter from Senate President Karen Fann purporting to issue a “public records request” to Dominion under the Arizona Pulic Records Law (“the Law”),” Dominion replied.

“Dominion is not a public officer or public body and, therefore, has no obligation to make its records available for public inspection,” the letter continued.

“Relatedly, Dominion’s privately-owned security keys and confidential passwords are not ‘public records’ subject to disclosure under the law,” Dominion added.

“Accordingly, because the Law has no application (!), Dominion will not produce or allow inspect of the materials requested in Senator Fann’s July 23 letter,” the statement concluded.

Before the 2020 election, it was a bipartisan matter of concern that privately owned voting machine companies are legally immune from disclosing its source code, data and security measures. Transparency and accountability are being held with U.S. government bodies such as the Cyber-Security & Infrastructure Security Agency (CISA); however, the same private companies that CISA is supposed to be regulating are parties to CISA’s “coordinating council.”

CISA is best known for pronouncing that the 2020 election was “the most secure in American history” – a statement that would have been impossible for CISA to know at the time. Therefore, the statement smacked of a PR statement, and it turns out there is a good reason for that.

“After allegations emerged that called into question the integrity of voting machines produced by Dominion Voting Systems, the Cybersecurity and Infrastructure Security Agency (CISA)—part of the Department of Homeland Security—issued a statement on Nov. 12 disputing the allegations, saying ‘the November 3rd election was the most secure in American history’,” the Epoch Times reported in November 2020.

“What the agency failed to disclose, however, is that Dominion is a member of CISA’s Election Infrastructure Sector Coordinating Council, one of two entities that authored the statement put out by CISA,” the report added.

Private companies and corrupt “regulators” in the U.S. government constitute a clear and present danger to the integrity of U.S. elections. The question is: Will anybody act?