Home
Latest News
CNN Sounds Alarms on Biden Approval Poll That ‘Should Terrify Democrats Ahead of 2022’
Prev Article Next Article
Share the Story :

The Democratic Party’s water-carriers at CNN are now sending up the warning flares that the Biden titanic has hit the polling equivalent of an iceberg and is taking on water fast. In a story subtly called, “This poll should terrify Democrats ahead of 2022,” Chris Cillizza provides his “analysis”:

It’s the rare poll that makes an entire party sit up and take notice. The new Iowa poll is one of those polls.

Just 31% of Iowans approved of how Joe Biden is handling his duties as president while a whopping 62% disapprove. Biden’s disapproval number is below the lowest ever measured by ace pollster J. Ann Selzer for former presidents Donald Trump (35%) and Barack Obama (36%).

“This is a bad poll for Joe Biden, and it’s playing out in everything that he touches right now,” Selzer told the Des Moines Register.

Biden’s approval on pulling American troops out of Afghanistan stands at a meager 22%. Approval for his handling of the Covid-19 pandemic is now just 36% among Iowans.

This poll is rightly understood as a blaring red alarm for not just Biden but especially down-ballot Democrats — in Iowa and elsewhere — who will be running in the 2022 midterms.

The Iowa poll is far from the only recent polling that shows the Biden ship of state is adrift at sea. Earlier in September, the NY Post reported on polls that showed all those swing states where Biden was declared the ‘winner’ in the 2020 election, now really, really, really don’t like him much at all.

More Americans in six critical swing states disapprove of the job President Biden is doing than approve as the administration tries to recover from the bungled military pullout in Afghanistan and a resurgence of COVID cases across the country, according to a new poll.

The president’s approval ratings in Arizona, Florida, Georgia, North Carolina, Pennsylvania and Texas ​lag behind his disapproval ratings by 10 points or more, a Civiqs survey shows. ​

In the 2020 presidential election, Biden won three of the states by narrow margins — Arizona, Georgia and Pennsylvania — ​and former President Donald Trump won the other three by slightly higher margins.

No one could have seen that coming — except for everyone who actually followed the 2020 election debacle. 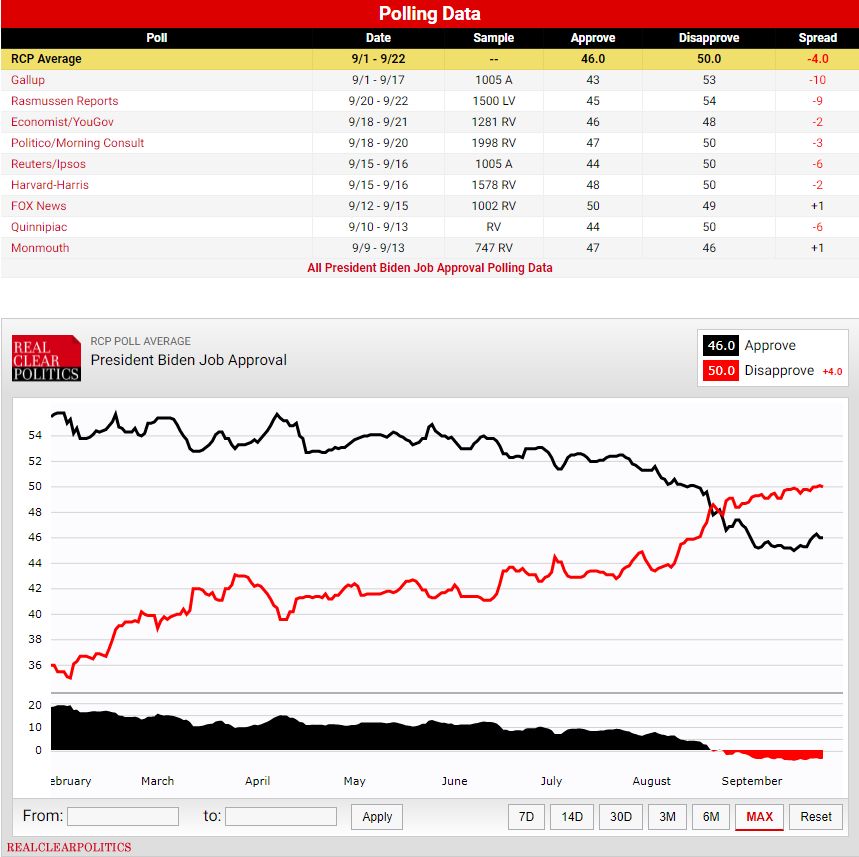 Also telling is most Americans now see the country on the wrong track than at any other time in Biden’s short presidency. Real Clear Politics notes the aggregate trend: 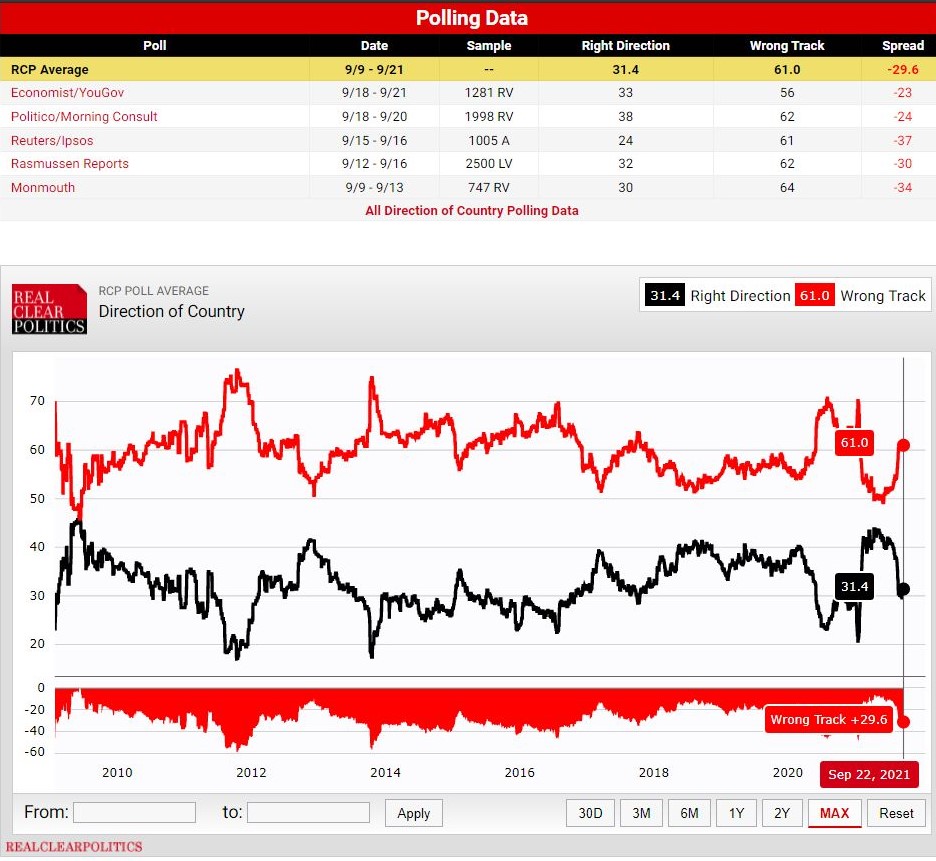 The Democrats’ generic ballot advantage is eroding fast and is now only at +4, according to the latest YouGov poll noted by FiveThirtyEight. This is not generally enough to get things done for the Democratic Party. Even worse for the Democrats, their vaccine push is alienating essential minority voters:

2022 is shaping up to be an absolute bloodbath already. If it doesn’t turn out that way – every voter will know exactly what to conclude.