A federal jury has awarded $25 million in damages to victims of the Charlottesville attack during a “Unite the Right” rally in 2017.

The jury’s decision to award millions in damages highlights the severe rift in the justice system when it comes to other riots and attacks, such as Black Lives Matter riots and the Waukesha parade attack on Sunday.

The jury’s decision in the case was reported on Tuesday by Buzzfeed News.

“A jury found a group of the most notorious white supremacist leaders and organizations in the United States violated state civil rights laws by conspiring to commit racially motivated violence at the 2017 ‘Unite the Right’ rally — and ordered them to pay more than $25 million in damages to their victims,” Buzzfeed reported.

“The 11 jurors came to the decision on Tuesday after a four-week civil trial that was punctuated with emotional victim testimony, descriptions of horrific violence, and bizarre outbursts that sometimes sounded more like Nazi propaganda than courtroom dialogue,” the report added.

It’s headline on-page, however, had to concede that there was no federal “conspiracy” found in this case. 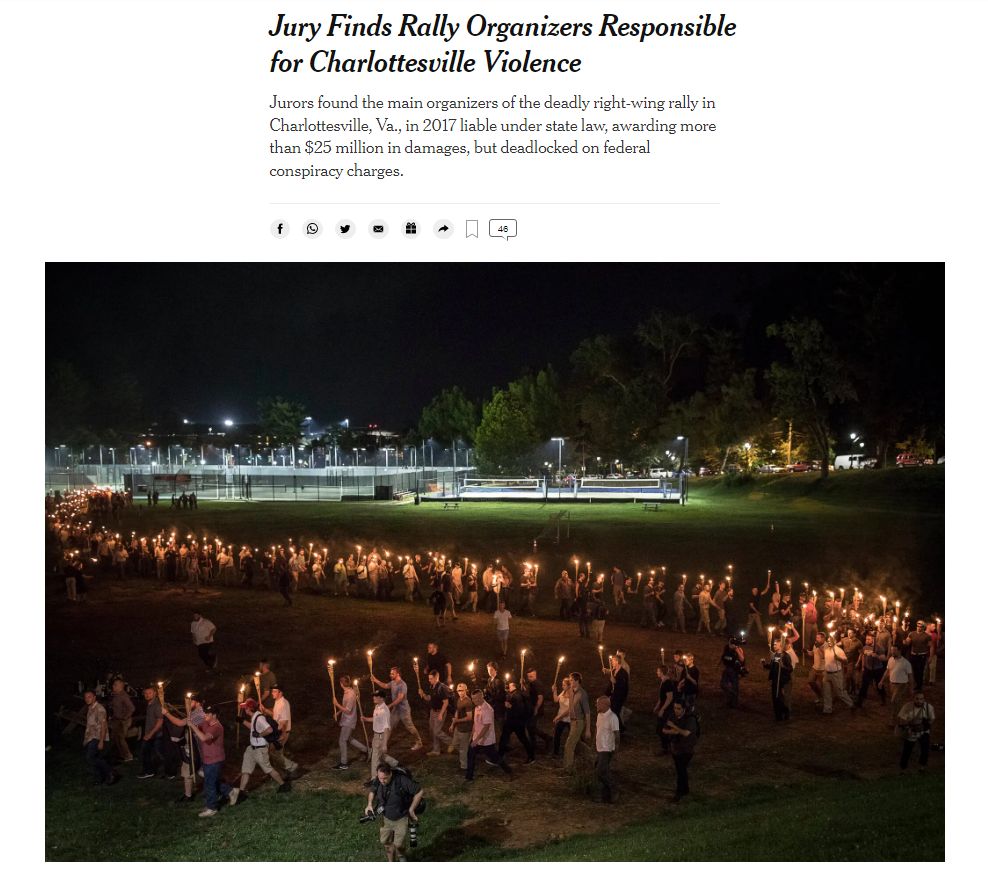 “Jurors on Tuesday found the main organizers of the deadly right-wing rally in Charlottesville, Va., in 2017 liable under state law for injuries to counterprotesters, awarding more than $25 million in damages,” the Times noted. “But the jury deadlocked on two federal conspiracy charges.”

In an account reminiscent of the FBI’s failure to find a centralized plot in the January 6 riot (often referred to incorrectly as an “insurrection”), the strands of the case did not add up to an overarching “conspiracy.”

“The jury was asked to decide whether each of the defendants had engaged in a conspiracy, and, if so, what compensation should be paid to the plaintiffs,” the Times noted. “The jury began deliberating on Friday. The 77 pages of instructions from the judge explained how engaging in a conspiracy did not require all participants to forge an agreement or meet in the same room, or even to know one another. Nor did a conspiracy require the participants to have caused the violence themselves. The main point was that they all shared an objective and could foresee the violence that occurred.”

“The plaintiffs drew a line from Mr. Fields through all the organizations that participated, linking him first to Vanguard America, the group that he marched with in Charlottesville, and then to the other organizations and their leader,” the report continued. “The defendants argued that it was all just a pile of online chatter that did not amount to strong connections, much less a conspiracy, among those involved. Nobody knew Mr. Fields beforehand, they stressed, and he was not involved in organizing the event.”

Interestingly, the Times emphasizes that Charlottesville was a “deadly” right-wing rally. A “neo-nazi” was said to have rammed his car into the crowd, killing one and injuring 35 others. The incident recalls immediately the Waukesha parade attack this weekend, when a radical ‘black supremacist’ named Darrell Edward Brooks drove his car into a parade of elderly people, women and children, but the mainstream news outlets have refused to highlight even Brooks’ race, let alone his Black Lives Matter-supporting views.

Darrell Edward Brooks, who is alleged to have committed the heinous crime, is now charged with five counts of homicide. The law enforcement authorities have dismissed any ideological motivation that Brooks might have targeting the parade goers, despite his social media activity revealing black supremacist posts that even included a vile Hitler-praising anti-semitic screed.

The Soros-connected District Attorney in Milwaukee, John Chisholm, had released Brooks on $1,000 in the week before for “allegedly running the mother of his child ‘over with his vehicle’ in a Milwaukee gas station parking lot on Nov. 2.”

Darrell Brooks intentionally drove his vehicle into the Christmas parade in Waukesha and is charged with 5 counts of intentional homicide, according to the police,’ Disclose reported.

The police charges contradict earlier media reports that the suspect, Darrell Edward Brooks, a convicted sex offender and radical Black Lives Matter supporter, may have driven into the parade incidentally after fleeing from another crime.

“Officials said … that preliminary investigation showed the driver was not aiming at the marching band or any other parade participant but was speeding through the route to flee an earlier crime, multiple law enforcement sources told ABC News.”

“Authorities spent the overnight hours scouring social media and other digital platforms associated with the person of interest who is now in custody. They have, at least so far, no reason to believe there is any connection to radicalization…” ABC repor

The legal authorities are not currently investigating the Waukesha parade attack as a potential act of “domestic terrorism.” This is consistent with the Department of Justice’s philosophy under Attorney General Merrick Garland, which dismisses the seriousness of BLM and Antifa riots, while targeting concerned parents at school board meetings who object to Critical Race Theory as suspected “domestic terrorists.”

“There’s that famous quote, like one of the house managers said, ‘A lie will travel halfway around the world before the truth has a chance to put its shoes on,” he said. “Well, this lie traveled around the world a few times, and made its way into the Biden campaign talking points, and ended up on the Senate floor. The Charlottesville lie, ‘very fine people on both sides.’ Except that isn’t all he said, and they knew it then, and they know it now. Watch this.”

“This might be today the first time the news networks played those full remarks in the context. And how many times have you heard President Trump has never denounced white supremacists? Now you in America know the truth.”

This is what Trump said, in context:

“Excuse me, excuse me. They didn’t put themselves — and you had some very bad people in that group, but you also had people that were very fine people, on both sides… You’re changing history. You’re changing culture. And you had people — and I’m not talking about the neo-Nazis and the white nationalists — because they should be condemned totally. But you had many people in that group other than neo-Nazis and white nationalists.”

When asked about the Charlottesville remarks after the initial press conference, he again condemned both sides.

The Charlottesville precedent now has many Americans wondering about the damages from hundreds of Black Lives Matter riots throughout 2020. The BLM riots took place in at least 140 cities following the death of George Floyd and led to at least $2 billion in damages, dozens of people dead, hundreds of arrests and the National Guard deployed in 21 states.

The BLM/Antifa riots even occurred at the nation’s capitol and went on for weeks in June 2020. Dozens of police officers and secret service agents were injured, as reported by CNN:

The officers and agents were injured when protesters threw “projectiles such as bricks, rocks, bottles, fireworks and other items,” according to the statement. “Personnel were also directly physically assaulted as they were kicked, punched and exposed to bodily fluids.”

In terms of scale and cost, the BLM riots were objectively worse than both Charlottesville and the January 6 riot. While over 600 suspects were charged in the BLM riots, most of them summarily let go, while a little over 200 suspects were charged in the Capitol riots. Nonetheless, January 6 defendants who are charged with such crimes as “parading without a permit” and “trespassing on federal property” are treated like domestic terrorists while thousands of radical BLM activists roam free.

The human price of this legal double standard was seen in Waukesha on Sunday, when a radicalized BLM activist drove a red SUV into a crowd of parade marchers, killing 5 people and injuring an estimated 48 others.

Thus, in Democrat-run America, justice is politically contingent. Juries can award $25 million in damages for riots that can be pinned on the political “right,” while the massive riots that dwarf them in scale and frequency are entire ignored by the FBI and the Department of Justice.

Editor’s note: The feature image is a comparison of a Black Lives Matter protest near Minneapolis and Charlottesville marchers.